Throughout their programmes, wtheysupport and empower community-led initiatives to protect forest and biodiversity, including anti-logging patrols, fire-fighting teams, environmental education and the replanting and restoration of damaged forests. All of their field programmes include high-quality scientific research as a basis for protecting and managing forests, and they have particular expertise in monitoring the distribution, population status, behaviour and ecology of Borneo’s flagship ape species; the endangered orangutan and southern Bornean gibbon.Their longest running programme, the Orangutan Tropical Peatland Project (OuTrop), was founded in 1999.  They carry out long-term ecological research; contribute to peatland restoration efforts and support local initiatives to manage and protect peat-swamp forest habitat. We are proud to support, advise and fundraise for the TSA Kalteng Community Patrol Team and other fire-fighting units in Central Kalimantan, who put their lives on the line to stop fires and save the forest.
Peat fires have once again returned to Borneo and haze is engulfing the region. The Indonesian government has declared a state of emergency for the Central Kalimantan province and urgent help is needed to support the brave firefighters battling these quick-spreading fires. 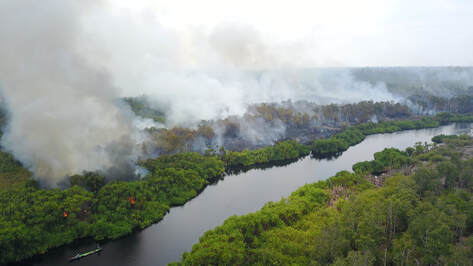 Forest fire on edge of Sebangau River Photo by Markurius Sera and Borneo Nature Foundation
With drought conditions well underway fires are now spreading into primary rainforest and causing huge damage to the environment and wildlife.​
Borneo Nature Foundation (BNF) is tackling these issues head-on.
Masyarakat Peduli Api (MPA), established and supported by BNF, are working tirelessly to extinguish the flames and prevent the spread of more fires. The brave men and women of the MPA are from villages bordering the Sebangau National Park, Central Kalimantan. These teams are truly on the frontline fighting to protect people, save the forest and stop the peat fires that are a major driver of global climate change.
BNF also supports the CIMTROP TSA fire-fighting team which has been active through five major fire events over the past 18 years; and are connecting all of these community teams through the Indonesian Disaster Agency. 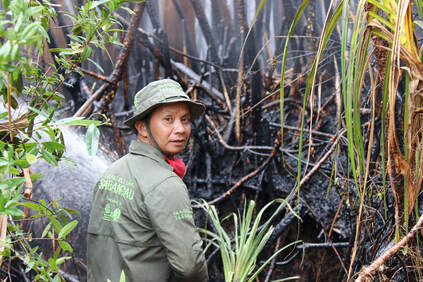 Hendri from CIMTROP Patrol Team and BNF Senior Project Coordinator 2019 Sebangau. Photo by Edwin Shri Bimo and Borneo Nature Foundation
All these dedicated firefighters need your support. They need fuel, food and daily income for their families, so they are always ready to extinguish any fire that arises, and they need the latest technology, best equipment and proper safety gear so they can quickly locate, map and tackle the fires.

CORE Borneo
CORE Borneo is a registered non-profit that was formed to support orangutan and tropical peatland forest conservation by conducting scientific research, training future scientists, providing environmental education, and engaging local communities in conservation. The Tuanan Orangutan Research Station Project (TORP) is the physical manifestation of CORE Borneo’s mission. Established in 2003, this long-term project is based out of the Tuanan Orangutan Research Station (2o09’ S and 114o26’ E), located in Central Kalimantan, Indonesia and has been primarily run by Universitas Nasional in Jakarta, The University of Zurich (Switzerland) and Rutgers University, with support from the Borneo Orangutan Survival Foundation. The Tuanan research area comprises 900 ha of peat swamp forest with a peat depth of 1-2 m in most parts (overall depth of ≤ 3.5 m), and is located in the 3,090 km2 Mawas Conservation Area, along the Kapuas Murung River. Established in 2002, the study area is recovering from selective commercial logging in the 1990s and subsequent illegal logging until the early 2003. Tuanan’s orangutan population density is estimated to be between 4.3-4.5 individuals/km2 [Husson et al. , 2009; van Schaik et al. , 2005], among the highest in Borneo [Husson et al., 2009]. We have collected behavioral data as part of the research project on over 130 identified individuals. We have been collecting data on orangutans continuously since 2003 and have accumulated over 100,000 hours of focal data on wild orangutans. 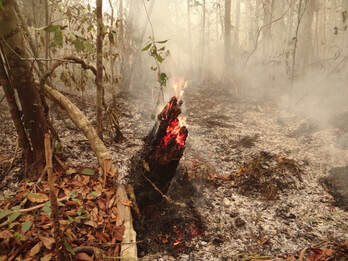 CORE Borneo supports research activities, environmental education projects, community development workshops, and the full-time TORP fire team – all activities in the research area and local villages. In 2015, Indonesia experienced some of the worst forest fires it’s had in more than a decade, burning an estimated 2.1 million hectares of land, much of it in Central Kalimantan. During the 2015 fires, roughly 10% of the research area at TORP was destroyed and the research camp nearly burned down. In this emergency situation, TORP researchers, students, and local staff found themselves on the front lines of firefighting efforts that threatened the research area and camp. In order to protect the forest, our team drilled deep (about 50 feet) into the peat, to access a water source to extinguish the peat fires. Thanks to a very successful crowd-sourced fundraising campaign, we were able to purchase firefighting equipment, and hire a specialized local team who will maintain these hydrants and patrol the forest for fires throughout the dry season. 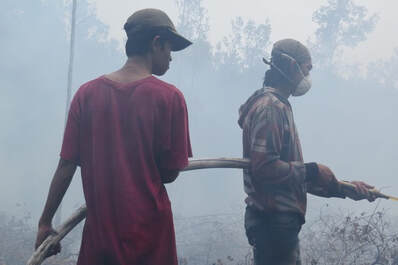 This year, in 2019, we are experiencing these fires again and need your support. With the support from organizations like Orangutan SSP we have been able to hire more local people to fight these fires and purchase the equipment we need to control the current fires. Please know that any kind of support that you could provide would go directly to fighting these fires and not to salaries or overhead costs. All of the CORE Borneo staff, the small NGO we constitute, and with the exception of our local fire team and assistants, volunteer their time. To read more about CORE Borneo, please click here https://coreborneo.com/

﻿AZA's policy statement on the use of apes in commercial entertainment.

Orangutans should never be pets, for many of the same reasons that they should not be exploited in the entertainment industry.

Just as with apes bred for performance, those produced by breeders for the exotic pet industry remove them from their mothers as tiny infants, often within days of birth. The argument is that by doing so, the infant will “bond” with the human owner. Such pet owners typically dress the apes in human clothing, keep them in their homes, and treat them like human babies. But just as with performing apes, these baby-substitutes inevitably grow too large, strong, and willful to safely handle. At this point, the owners must cage their “pet” – a confusing and frustrating new reality for the young ape. Even if the pet-owner is able to construct an ape-proof caging system in his home or backyard, the situation will remain unsatisfying and inhumane for both parties – the orangutan, accustomed to a life as a treasured family pet, remains consigned to life in a cage (typically much smaller and less complex than the enclosures zoos and sanctuaries construct for apes), and the family faces the daily guilt and disappointment of managing their former cute and cuddly infant into adulthood. And since orangutans can live more than 50 years in captivity, there is the additional concern of caring for the ape beyond the lifetime of the original owners.
(C) Copyright Orangutan SSP 2013-2019