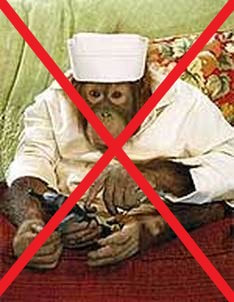 Even as the public becomes more enlightened about animal welfare, orangutans continue to be exploited to perform in live stage shows at tourist attractions, television productions, movies, advertisements and circuses.  Audiences see cute, cuddly, human-like animals and they often form the impression that they are easily handled. These images make apes popular as pets and for use in the entertainment industry, and the cycle continues.

Many people are familiar with the “No Animals Were Harmed”® tag the American Humane Association (AHA) grants to many movies and TV shows. The AHA has exclusive on-set jurisdiction from the Screen Actors Guild to supervise the use of animals in such productions. Unfortunately, while conditions during a video shoot may be monitored, there is no way to know how apes are treated when they are not “working,” and trainers typically use fear and physical discipline to control their apes; the degree of force increases as the apes grow and become more powerful and strong-willed.


Our concern for the well-being of orangutans cannot be limited to their time on-set; we must give consideration to what has happened and will happen to these individuals throughout their lifetimes – from removal from their mothers to their options for post-performance lifetimes. 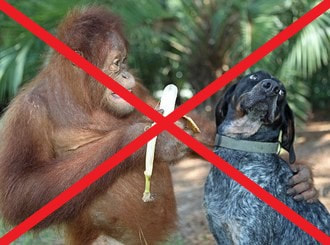 Performing apes are always infants or juveniles. This is the only way to achieve the training necessary for unnatural, humanized activities like swimming, wearing clothing, and interacting with human props. Adult orangutans cannot be handled in this way, so for owners wishing to create such performances, infants must be taken from their mothers for training. This causes tremendous emotional and psychological distress to the mother as well as to the infant.

Similarly, little attention is paid to the long-term outcome for such orangutans. It is critical for the public to become aware of what the options are for performing apes when they are too big and strong to be handled. Because they have been raised by humans and trained to perform human tricks, they cannot be readily integrated into an orangutan group – they do not know how to “be orangutans.” Further, enclosures capable of safely and humanely housing apes require substantial space and careful adherence to strict construction standards – the empty shed on zoo grounds, a chain-link cage in the children’s zoo, or that monkey enclosure from which the current residents could be moved simply will not contain an ape. Together, these factors mean that ex-performing apes cannot just be moved to a zoo or sanctuary after they – inevitably – grow too dangerous to be handled. Zoos and sanctuaries can neither immediately place an ex-performer with an existing orangutan group, nor do they readily have the space or resources to build new enclosures for such apes. The vast majority of these orangutans are placed back in the pet/dealer trade and all too often in very inhumane conditions, caged as breeding stock to produce more infants, or relegated to small, substandard cages for the remainder of their very long lives (orangutans can live more than 50 years, but can only be safely handled for the first 6-8).
The Orangutan SSP Steering Committee understands that humorous entertainment, just like wildlife,
plays an important and positive role in our lives. It is our hope that society continues to find ways
to balance the two to the benefit of all. We also understand that it is our responsibility
to educate not only our visitors but also the highly influential news media, which may be unaware of the
adverse consequences a seemingly harmless programming decision can have on wildlife conservation.

Thanks to the efforts of the Chimpanzee SSP  and the Ape TAG, some companies have listened to these and other arguments against the use of apes in entertainment and have pledged to never do so again.
Visit Project ChimpCARE  to see the current listing when you choose Non-Users in the Category drop down menu.
The Center for Great Apes  provides a permanent sanctuary for orangutans and chimpanzees who have been retired from the entertainment industry, from research, or who are no longer wanted as pets. The Center provides care with dignity in a safe, healthy, and enriching environment for great apes in need of lifetime care, and works hard to educate the public and the news media about the real story of apes in entertainment. 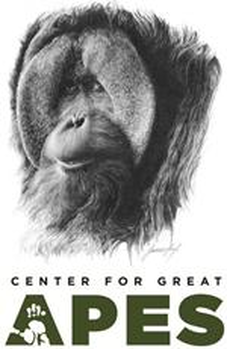