Taxonomy
In the distant past, orangutans existed throughout southeast and southern mainland Asia, but their populations are currently only found in northern Sumatra (Indonesia) and in Borneo (Indonesia and Malaysia). Throughout much of their history in human care, there has been debate about the degree to which the orangutans living on these two islands differ genetically. Until the latter part of the 20th century, most zoological collections managed the apes as a single species, regardless of individual origin, thereby creating a large hybrid population. Significant genetic studies performed in the 1980s and 1990s demonstrated that the orangutans from the two islands are indeed genetically distinct and classifiable as separate species – Pongo pygmaeus (Bornean orangutan) and Pongo abelii (Sumatran orangutan). 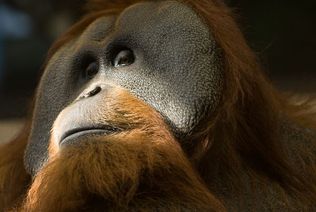 P. abelii, photo copyright Joel Sartore
The previous system classified the taxon as one species with two subspecies, Pongo pygmaeus pygmaeus (Bornean) and P.p. abelii (Sumatran). Species-level classification was advocated jointly in April 2000 by Conservation International, the IUCN/SSC Primate Specialist Group, and the Center for Environmental Research and Conservation. The newer system, recognizing two distinct species, is universally accepted today, based on genetic and morphological data. Some observers have postulated behavioral differences in the level of sociality and other factors between Bornean and Sumatran orangutans as well, though limited data exist to support this supposition, and it may be more related to population density and competition for resources. Further research is needed to clarify this question.
The current classification system recognizes three subspecies of the Bornean orangutan. These are  the Northeast Bornean (Pongo pygmaeus morio, from East Kalimantan and the Malaysian state of Sabah), the Northwest Bornean (P. p. pygmaeus, from northwestern Kalimantan and the Malaysian state of Sarawak), and the Southwest Bornean (P. p. wurmbii, from southern West Kalimantan and Central Kalimantan). Because holding space is limited, the Bornean population is not managed to the subspecies level in captivity – populations of sufficient size to be viable cannot be maintained in captivity. The Sumatran orangutan remains one distinct species with no subspecies.
Hybrid Orangutans

Because the species (at the time, subspecies) distinction was not clearly understood until the late 1980s, there was a sizeable population of “hybrid” orangutans in human care worldwide.  In 1985, the Orangutan SSP adopted a policy placing a moratorium on the production of hybrid orangutans. The other regional zoo management programs (Europe and United Kingdom, Australia and New Zealand, Southeast Asia, Japan) adopted similar policies during the same time period. In 1994, the Orangutan SSP Steering Committee extended the policy to recommend that permanent surgical sterilization be accomplished for all hybrid orangutans held in situations in which there was any possibility of potential reproduction (whether by accident or by design), if the health of the animal permitted such surgery. This recommendation was based on the fact that despite the 1985 breeding moratorium, a low rate of production of hybrid orangutans persisted through accident; constraints on holding space made it difficult to find future suitable homes for orangutans thus produced unintentionally;  and despite the potential value of hybrid orangutans as social companions and in assisted reproductive technology or other research, the Steering Committee did not believe that value would  ever outweigh the potential risk inherent in maintaining their intact reproductive status. The preferred methods of sterilization are tubal ligation for females and vasectomy for males.

Photo by Woodland Park Zoo
It is important to note that it has never been the policy or the recommendation of the Orangutan SSP to castrate any orangutan, and this has never been done under the auspices of the SSP.  Similarly, the SSP has never advocated or recommended that an orangutan be hysterectomized except for reasons of individual health – never because of genetic lineage.

It is equally important to emphasize that hybrid orangutans are housed and managed identically to their Bornean and Sumatran counterparts; all orangutans in the SSP are managed equally regardless of genetic lineage.  Most members of a zoo’s visiting public would never be able to differentiate between the species “by eye,” so the educational and exhibit messaging does not need to vary – the same message can be conveyed regardless of orangutan species displayed. Hybrid orangutans are a nonbreeding population within the SSP, but they are never an unmanaged or unimportant population.
Selected References

Jones, M.L. 1969. The geographical races of orangutan. In: PROCEEDINGS OF THE 2ND INTERNATIONAL CONGRESS OF PRIMATOLOGY, Volume 2. Basel: Karger, pp. 217-233.