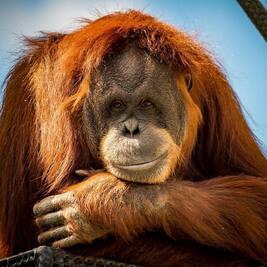 Photo by Jackie Scherer Photography
​It’s an all-too-human condition: Our species smiles a lot. We do.

At a very young age, we learn what a smile means: play, approval, joy. As we grow and mature, a smile means even more things: manners, recognition, a greeting. Its frequency of use and layers of meaning are not the same across all human cultures, but in its most primitive form, a smile means a human is happy.

If we dig even deeper into the intentions of a smile, in the 21st century, it can mean even more things: sarcasm, fakery, an overused emoji. It can say to our fellow humans, I am being completely passive-aggressive. I could be saying something totally nicey-nicey, or I could be totally cutting you down with a scythe of scorn by ending my email with :-).

So why on our fragile green planet are we so stuck on the fact that our fellow apes don’t smile?

Those who know don’t “anthropo.”

First, we need to recognize that humans are actually rather in the minority when it comes to showing our teeth when things are A-Okay. For many, many species, the showing of teeth generally means quite the opposite: fear, alarm, even a belligerent threat. In fact, of all the known primates – that’s well over 200 species – we humans are not in a majority in this smiling thing. Several monkey species, perhaps most famously the drill, have a “smile” facsimile. Known as an appeasement grin, it’s used to express peaceable intent on approaching another individual. But even the drill doesn’t show its grill for the multitude of reasons we do.

If a nonhuman great ape were to peel back her lips and display her teeth to you, and your heart swells with a rainbow of warm fuzzies, you have definitely taken things the wrong way. Even without attributing our own emotions to their behaviors, we do know that when a nonhuman great ape “smiles” in the way that we know it, it is generally not a positive response.

If it makes us feel any better, they aren’t smiling in secret when we’re not looking. A wild orangutan who is foraging in the forest and stumbles upon a giant pile of free durian fruit – with no other orangutans around to have to share – might think today is the Best Day Ever, but she’s not going to “smile.” 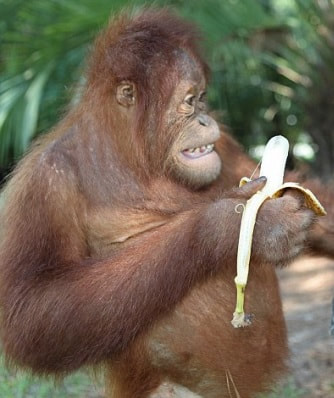 ​Can we have an example?

As unfortunate as it is, many of us have at some point in our lives have seen examples of orangutans or chimpanzees performing in films, televisions, circuses or worse, and we as advocates for these apes know the horrific dark side of this form of “entertainment.” Ironically, it’s this very “smile” that can make these performances appealing to human onlookers, who mistake that the ape is speaking their language.

It is not our language; it is not a smile. The expression does have a name, though: fear grimace. At some point early in his or her “training” – very likely when he or she was an infant or juvenile – this individual reacted in fear, stress or pain, and produced this expression. Over subsequent episodes of negative reinforcement, this expression was reproduced enough times that it became something to be rewarded. And there you have the “smile” seen in the film, the TV show or on the Vegas stage.

Much the same, but not the same.

We celebrate what we have in common with them – their similar faces, their extraordinary cognitive abilities, their ability to problem-solve, their care of their offspring, their capacity for emotion, their very DNA. But as always, we must also not just celebrate, but respect, their otherness. One of the best ways to do that is to respect them enough not to presume that our emotions are universal among other species.

We know that nonhuman great apes have an incredible breadth of emotions. That’s not in dispute. But that doesn’t mean those emotions should be human or are any less worthy of our admiration. Orangutans and other great apes don’t have to prove their capacity for emotion to us with facial expressions; they have their own “language of flowers,” and it doesn’t have to be the same as ours to be beautiful.

They are who they are, and who they are is amazing. And if we truly understand that and wish to ever understand them, we meet them where they are. Because in meeting them there, we are together in a place where we understand more about them – and maybe even more about ourselves – than we ever did before.

The concept of meeting other species where they are, not where we are, has rarely ever been expressed more beautifully than in the words of Henry Beston in The Outermost House. It’s food for thought, forever:
We need another and a wiser and perhaps a more mystical concept of animals. Remote from universal nature and living by complicated artifice, man in civilization surveys the creature through the glass of his knowledge and sees thereby a feather magnified and the whole image in distortion. We patronize them for their incompleteness, for their tragic fate for having taken a form so far below ourselves. And therein we err and greatly err. For the animal shall not be measured by man. In a world older and more complete than ours they move finished and complete, gifted with extensions of the senses we have lost or never attained, living by voices we shall never hear. They are not brethren, they are not underlings, they are other nations, caught with ourselves in the net of life and time, fellow prisoners of the splendour and travail of the earth.
(C) Copyright Orangutan SSP 2013-2019