Orangutans are one of the five types of great ape, along with chimpanzees, gorillas, bonobos, and humans. Orangutans are the least-studied, and most unique, of the great apes, and it is their uniqueness that makes them both challenging and fascinating for those managing them in our care.
Taxonomic Classification

First, orangutans are the only Asian representative of the great apes (while gibbons are Asian and are apes, they not considered taxonomically to be members of the great ape family). The orangutan's range once extended throughout most of southern Asia, and their fossil remains have been found as far north as southern China, but they are now restricted to isolated populations in northern Sumatra and Borneo, in the countries of Indonesia and Malaysia. Each of the other four great apes - gorillas, chimpanzees, bonobos, and humans - are African animals. 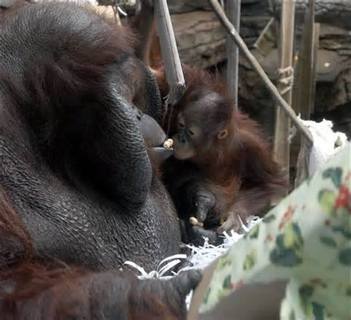 Photo copyright The Toledo Blade
Second, orangutans are almost exclusively arboreal (tree-dwelling), and spend the overwhelming majority of their lives high in the treetops. Adult males do travel on the ground in many instances, often because of their large size (orangutans are, in fact, the largest arboreal animal in the world, with females and males weighing approximately 120 and 250 lbs, respectively). The African apes are much more terrestrial, though all great ape taxa are known to use at least the lower levels of trees for climbing and traveling.

Finally, orangutans in the wild are less gregarious than the African apes. Adult males in the wild spend much of their time alone; adult females are generally accompanied only by dependent offspring. Orangutans, especially females, will congregate to take advantage of a rare or seasonal preferred food item, but by and large they spend their time alone. This lifestyle seems to be the result of ecology: big-bodied, arboreal, fruit-eating animals cannot live in the large, gregarious social groups of the African apes. Fruits are a sparse resource; a large group of orangutans would be unable to obtain sufficient food by feeding at one site. Additionally, a fruiting tree might be unable to physically sustain the weight of many orangutans feeding together.

In human care, however, orangutans are usually housed in social situations – and they thrive under such circumstances. It appears that when the constraints and necessities of wild ecology are removed as in a zoo setting, orangutans can and do display a range and depth of social behavior comparable to that of the more sociable African apes. Solitary housing of orangutans, as a direct translation of the social units observed in the wild, is not a requirement of appropriate zoo or sanctuary husbandry; this taxon has demonstrated itself to be adaptable to a wide range of housing conditions, from individuals housed alone to large, mixed age- and sex-class social groups. This taxon is perhaps best described as solitary-but-social, as opposed to one or the other. Many individuals show every indication of enjoying the company of conspecifics, and adult males are often seen to actively play with youngsters.
Physical Description

Orangutans are large-bodied apes with sparse, long, shaggy, reddish-orange to dark brown hair. They are the world’s largest arboreal animal and have long, flexible arms to support their tree-living lifestyle. Orangutans' arms are one-and-a-half times longer than their legs, and they also have very flexible, fully-rotating hips. Their feet are hand-like, making it easier to climb. (It's not inaccurate to describe orangutans as "four-handed"!) Orangutans have long fingers and opposable thumbs. Like all apes, they are tailless. They are sexually dimorphic, with distinct differences in size and appearance between sexually mature males and females. Males are nearly twice the size of females, and while both sexes are bearded, only adult male orangutans develop cheek pads (flanges), made of subcutaneous fibrous tissue. Both males and females have a sac hanging from their throat, but the male's is much larger and may be used to propel vocalizations across long ranges in dense jungle habitat. Orangutans have 32 teeth, and both males and females have powerful jaws capable of processing tough foods. Their lips help them to detect food textures before eating.

There are physical differences between the three species of orangutan as well, most apparent in adult males. Some of these inter-species differences in physical appearance are listed here.